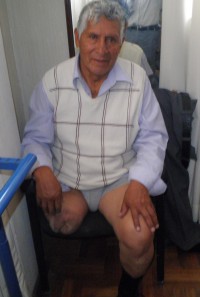 Agapito worked as a young carpenter in La Paz in conditions that were normally hazardous but necessary to get the job done. When he was 23, he was riding on top of a truck when it flipped over, hurled him to the ground and crushed one of his legs. The trauma to his body was so intense that Agapito went unconscious and stayed in a coma for over two weeks. When he awoke in the hospital, it was the first time he saw that his leg was amputated above the knee.

Agapito was fortunate enough to get a prosthesis that enabled him to sustain a living as a carpenter after his devastating loss.

However, over time, Agapitos’s occupation put a lot of wear on his prosthetic leg. After more than 10 years of having the same prosthesis, walking became an ordeal of pain making his life miserable. At age 63, forty years since his accident, he had given up hope living his remaining years without emotional and physical agony.

With money that Sending Out An SOS donated, Agapito was able to obtain a prosthetic through the Rotary La Paz-Centro de Miembros Artificiales whom we sponsor. He is now able to walk without excruciating pain and still continues to work by painting houses enabling him to earn money for himself and his family. Agapito feels there is hope again with the relief of a new prosthesis that has significantly improved the quality of his life. 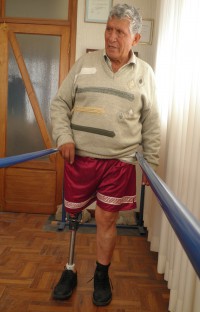 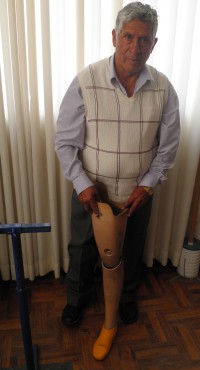