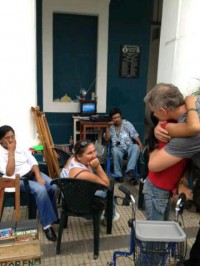 On December 15, 2011, around 100 half-naked disabled protesters entered the main square of Santa Cruz de la Sierra in wheelchairs and crutches after traveling 567 km (350 miles) from Trinidad, Beni for 30 straight days. Some of the handicaps crawled around the square demonstrating against further violations of their rights by the government that would rather turn them away leaving them adrift and left to die. These Bolivians were demanding a 70% rise of the subsidy they were receiving from the government allocated annually at just $119.00 USD. This would take the amount up to $399.00 USD. However, they were dispersed by the local police through violence and tear gas. Based on the police response, the government didn’t seem  willing to help the Bolivian disabled population. Hunger, thirst, accidents, potholes in the paved road, lack of drugs and fatigue were the obstacles that confronted the marchers.

They proceeded to travel to the Centre of La Paz after a 100-day trek having covered more than 1,500 km (932 miles) through Bolivia to get to the capital. These disabled protesters relied on charity during their journey to the highland capital of Beni, bordering Brazil, in November of 2011.

While Sending Out An SOS made a recent visit to the city of Santa Cruz where Elizabeth Bress was born, she and co-founder Jeffrey Vonder Haar visited the Santa Cruz main square, where there were nearly 20 protesters that had been camping out for over a month. They were still waiting for a positive response from the government that had not yet been given. Elizabeth and Jeff asked each protester what they could provide for them to meet their basic needs. To their great surprise, none of them asked for money, but only for canes, wheelchairs, scooters and adult diapers.

Within a couple of days, laughs, tears, disbelief, happiness and sentiments of gratitude were the emotions they each showed when Jeff and Elizabeth returned to the main square with all of the items requested. The disabled protestors were so thankful the promises that were made, for once, were not broken.

As well as higher subsidies, they wanted greater efforts to help integrate them into a society that makes little provisions for those with physical or mental disabilities. The government must listen if they want their children to study and have a better chance in life.

This was Sending Out An SOS’s first contribution to the handicapped people who live their entire lives with their basic rights nearly abolished.

Sending Out An SOS is looking to obtain donations from people such as yourself. If you feel compelled to help in any way and want to donate to this great cause, we ask you do so now. We aspire not only to help 50, 100 or 1,000, but millions of handicapped people in third world countries around the world. Click here to make a contribution.